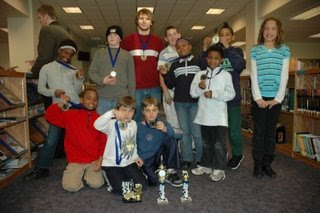 Island residents are used to arriving at the Washington Island Ferry and receiving directions for parking on deck. The morning of the chess tournament, Joel, a ferry crewman, directed our student-filled car by using chess notations --"Pawn 4, queen 6," he said, motioning to the space where he wanted us to park.
The Washington Island Chess Club attended our first tournament at Southern Door High School, February 28. Nick Knudson placed 8th in the K-12 division. He beat the number 2 rated player of Southern Door in his third game during round 4. The student Nick lost to became the tournament winner. Oliver Hansen won 5th in K-6. Hannus, Alex and Ben Johnson, Korrina, Micala, Joshua, Kayla and Shammond Ervin all won medals! Kayla, a kindergartner, was our youngest player. The Washington Island team won 3rd place in the K-3 division. And, students won 2nd place in the K-6 division!
Brett Hanson, the tournament director gave each one of our players ½ point since our arrival time (coming from Island) missed the first round. When it came time for the second round, most of our Island players were cautious. Some were scared. By the third round all players were running eagerly to take their places in the library across from assigned partners. Between rounds, adults sat with players, debriefed the round and practiced moves. The gym was open at Southern Door High School so students played basket ball and badminton between tournament rounds.
I don’t get paid for this,” said Bob Patterson-Sumwalt, president/founder of the Wisconsin Scholastic Chess Federation as he shared club tips, links, study books, knight and pawn rubric and other resources with Washington Island Chess Club members. “We are growing young minds for the future,” Bob said showing examples of “First Move", a curriculum for second and third graders from the America’s Foundation for Chess. The Idaho legislature voted to provide "First Move" in every 2nd and 3rd grade classroom in the state. There are schools that have improved their student’s math scores by 20% with chess added to the curriculum.
Following the tournament, the Washington Island Nick and Hannus were still playing chess at 12:30 a.m. the morning before sleep at the Maritime Best Western in Sturgeon Bay.
The Washington Island Chess Club meets on Wednesdays, 3:30 at Bread & Water. Warren Marik, Bob Eldridge and Valerie Fons are volunteer leaders. The school bus drops off students (with parent permission) at Bread & Water. Snacks are served. There is no charge. Students and adults are welcome.
Posted by Valerie Fons at 11:54 AM No comments: 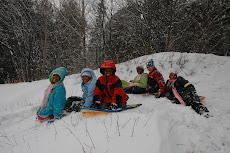